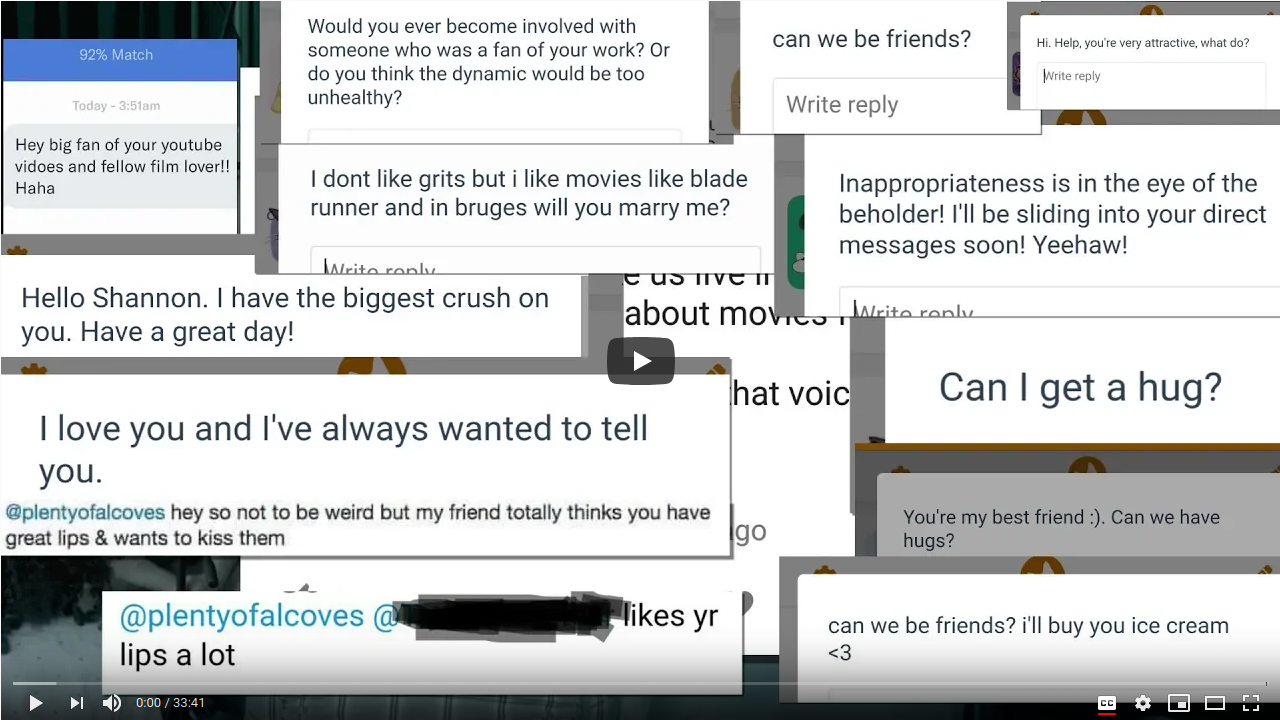 I recently watched the video essay youtube: bad? by Shannon Strucci, and I think it gets at blindingly obvious, easy to forget, really important idea. However, the video is somewhat long, and covers a lot of Youtube/DMCA specific things, which (while important), detract from my main takeaway, so I’ll summarize the video here. I still definitely recommend watching the video if you have time. It communicates these ideas much more thoroughly, and also goes into some interesting detail about what publishing on Youtube is like.

In the video, Shannon talks about several of their creative projects — they have a Youtube channel featuring mostly analysis and criticism of movies and TV shows, that currently has around 37 thousand subscribers. With so many subscribers, some hate messages are inevitable, and Shannon has definitely had their share, ranging from insults to unwanted confessions of love to death and rape threats.

Except… hate messages aren’t actually inevitable. Shannon is also a co-host of several podcasts, the most popular one with almost 1,500 supporters on Patreon, and they haven’t gotten any actual harassment from it. There are people who don’t agree with the ideas, or who don’t like the format, and leave comments saying that, but none of the straight-up harassment that was a defining feature of being a semi-popular youtuber.

Maybe like 6 months into Critical Bits I actually started joking with Joel that like, nobody had even told him to kill himself yet, like, what’s that, what’s so different from Youtube? And it’s over a year in, and that still applies. It’s possible to get acclimated to any kind of bad situation, and I knew Youtube was bad […] but I just assumed that any creative work online would feel like that. But I was wrong. And I wish I had realized I was wrong earlier. Or at least not let myself be the kind of person who sees Youtube’s culture as normal or expected.

I’ve been thinking about this a lot, especially since writing about Bob Martin — setting aside the harassment I got on Twitter from writing that post, I got a lot of people basically saying “sure, maybe Bob Martin is a bit of an asshole, but that doesn’t mean you need to ignore what he’s saying.” And I really don’t understand that! Personally, I’m way happier when I’m in social spaces that don’t have any assholes in them, and making those spaces happen requires kicking people out way before their behaviour reaches the level of being something you can unambiguously call harassment.

I think that a lot of people just have never been in a space like this, and thus don’t realize that something like this is even possible — the first time I ever experienced this was at the Recurse Center The Recurse Center definitely isn’t perfect in this regard, but it’s far, far better than any other community I know of. , and I’m not part of any other large community that’s like this.

I don’t know what makes Youtube so bad, and podcasts relatively good. I think that there are probably a lot of effects at play, and building communities is really hard. But I do know that all of the platforms that I’d call “social media” have the effect that having a large following is structurally encouraged, and also leads to constant harassment.

I don’t have a solution here, but it’s something I’m thinking about a lot these days.