Notes on “Notes on the Synthesis of Form”

Notes on the Synthesis of Form (1964) is a book by architect Christopher Alexander, Who is better known in the software world for being one of the authors of A Pattern Language, from which the “Patterns” in “Design Patterns” comes. attempting to lay out a mathematical foundation for the process of design. While the book fails to construct a compelling mathematical foundation for design, This is not just my analysis, but also appears to be Alexander’s as well — in 1971, he wrote “I would say forget it, forget the whole thing” of the entire field of “design methods” — a field which he pioneered with Notes on the Synthesis of Form. the non-mathematical parts of the book provide some interesting lenses on what the process of design is, and how design should be thought about. The book defines “design” as:

The ultimate object of design is form. […] every design problem begins with an effort to achieve fitness between two entities: the form in question and its context. The form is the solution to the problem; the context defines the problem. 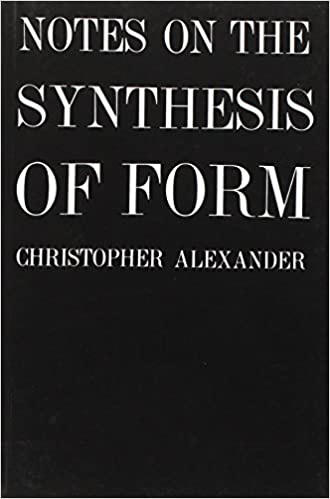 The cover of “Notes on the Synthesis of Form”

Let us consider an ensemble consisting of the kettle plus everything about the world outside the kettle which is relevant to the use and manufacture of household utensils. Here again there seems to be a clear boundary between the teakettle and the rest of the ensemble, if we want one, because the kettle itself is a clearly defined kind of object. But I can easily make changes in the boundary. If I say that the kettle is the wrong way to heat domestic drinking water anyway, I can quickly be involved in the redesign of the entire house, and thereby push the context back to those things outside the house which influence the house’s form. Alternatively I may claim that it is not the kettle which needs to be redesigned, but the method of heating kettles. In this case the kettle becomes part of the context, while the stove perhaps is form.

Despite this acknowledgement, the book goes on to ignore any discussion of how one should make the choice of what is form and what is context, instead assuming the boundary is a given. This is, I think, the fundamental problem in Notes on the Synthesis of Form. One of the most important skills in design is looking at the world and asking yourself “Does this make sense,” and pushing back when the answer is no.

While small gains can be found in honing the craft of designing forms to better fit a given context, large leaps are almost impossible without stepping back and being willing to change both sides of the equation. There are reasons to avoid changing too much at once, but we do ourselves no favors by uncritically assuming the context that surrounds us and limiting the scope of our solutions before we even begin.