The Heritage of Tools

Humans are, I believe, the only animals that are “higher-order” toolsmiths — that is, we not only manufacture tools, but we manufacture tools that have the sole purpose of being used to manufacture other tools. I am not completely confident that humans are the only species to do this - significantly, New Caledonian crows have been known to exhibit compound tool construction and metatool use, but I was only able to find references to them doing this separately — documented instances of metatool use in New Caledonian crows appear to be limited to using existing tools to reach and manipulate other existing tools. While humans have massively complicated tools at our disposal, requiring trees of tens of thousands of tools in order produce, See, for instance, The Toaster Project for an interesting overview of the effort involved in making just one relatively simple household appliance. we still can see the echoes of our old tools in the new.

When I first started thinking about this, the obvious examples to me were all software related — my day job was working on a new operating system, and I kept seeing us import the mistakes of Linux into our new system, simply because the development tooling that we had was built to work that way. It’s mostly the little things that slip through — ANSI escape sequences come to mind. Once I left Fuchsia, I started hacking on my own little operating system, written in a custom dialect of Forth, and I started to feel the walls close in more. The way that computers represent text is quite limiting — but if you choose an alternate text format, you need to write your own text editor, your own serial console, your own debugging tools, your entire world. But software is much less interesting than physical tools, so let’s turn our attention for a moment to the material world. 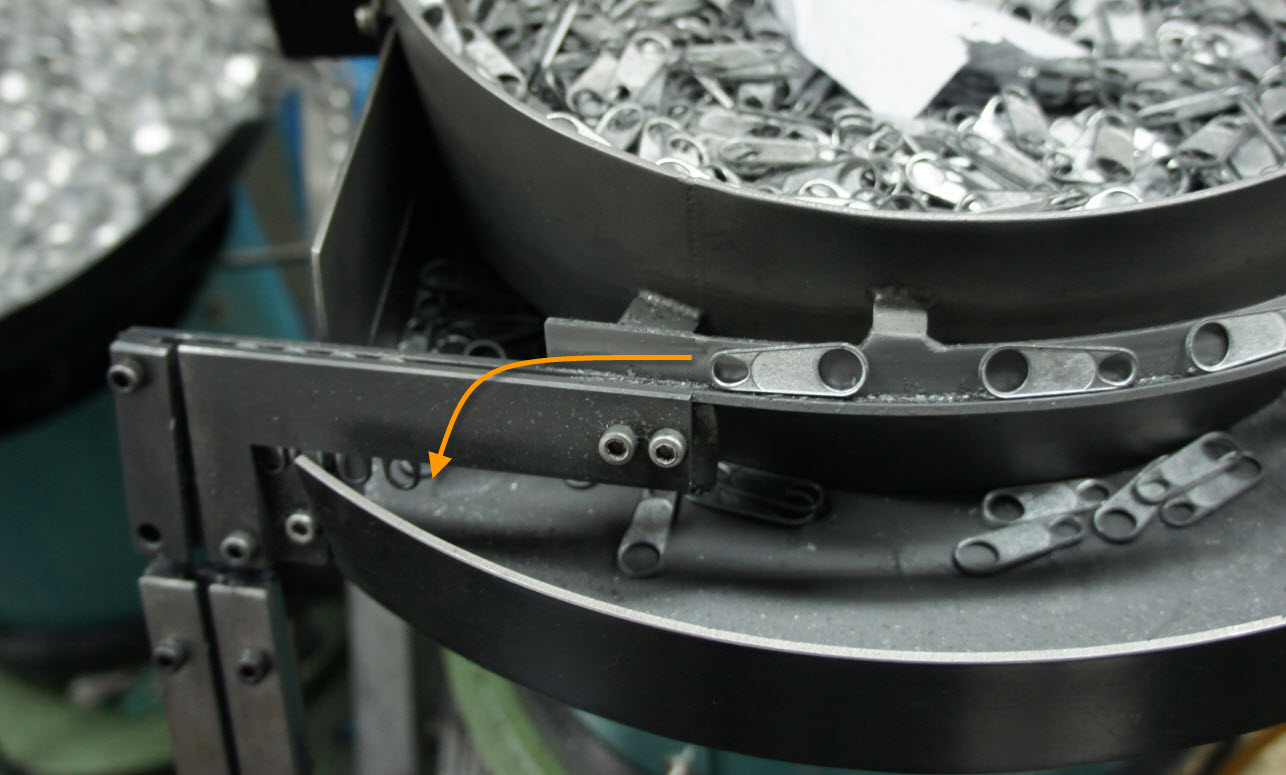 A zipper pull alignement system.
Image Credit: Andrew Huang, CC-BY-SA 4.0 Do you have a zipper nearby? Examine the zipper pull - the little bit of metal attached to the zipper to allow your fingers to grasp it. Look at the very tip of the zipper pull — there will likely be a slight bump, a little nub. Why is it there? As bunnie explains, the nub is used to align the zipper as it’s being manufactured. Once the zipper has been manufactured, it’s placed in a vibrating pot where it’s moved to a rail that cleverly uses the nub for alignment, ensuring that all of the zippers come out of the factory facing the same direction. And so zippers have nubs on them, to allow them to be mass produced with specialized equipment.

I started off talking about higher-order tools, though — tools that are used to manufacture tools. If we want to look for echoes in these, where should we go? I think that looking at the history of fastening devices provides an interesting perspective. A huge amount of modern construction is done with screws, but this wasn’t always the case — screws were invented in the 3rd century BC, This is maybe a bit of a stretch, since while the screw was known in the 3rd century, it was primary for use in screw presses, rather than in fastening. In any case, there was a significant gap between the time when screws were known, and the time when they saw mass adoption. but weren’t widely used as a fastening device until the 1800s. The reason for this is not that screws were not useful, Looking at available fasteners, the screw is unique in its combination of tensile strength and flexibility of installation — while rivets have been around since before screws found mass adoption (in the form of clinch bolts used in shipbuilding), screws provide very good tensile strength while only requiring access on one side to install, which is something that was not available before their invention. but that they were manufactured by hand, by extremely skilled workers painstakingly filing away at round rods, and were thus prohibitively expensive to manufacture. This all changed in the mid 1700s, with the invention of the screw-cutting lathe — the discovery that you could use an existing leadscrew to design a lathe that would automatically move the file at the required distance in lockstep with the rotation. It’s easy to imagine that this discovery was inevitable, but it’s only inevitable insofar as cheap screws blocked the development of other technology.

When you start to learn about “design for manufacturability” and read about the history of manufacturing systems, you start to notice a lot of the same patterns in everyday items that are in no way fundamental, but are purely limitations of our manufacturing processes. Every plastic item you touch is limited by the constraints of injection molding (and thus also by the constraints of the milling that produces the mold, although mills are generally much more flexible than molding processes), and every bit of metal constrained by the extruding and bending and welding and fastening processes we have available. Again, it’s easy to think of the developments that we’ve had as inevitable, and the state of physical materials fixed, but we only invented TIG and plasma welding in the past 80 years, and advancements in materials science are being made all the time.

The echoes of our tools are in everything we build. If you’re building things, it’s worth thinking about which directions your tools are pushing you, and what tools you can build to push back.