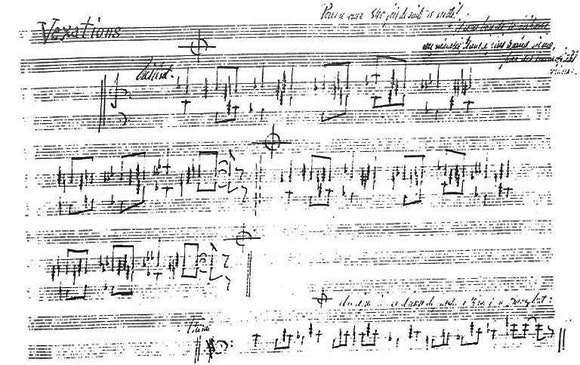 I recently discovered the musical piece Vexations by Erik Satie — a half page of sheet music, written in an idiosyncratic notation — the only hint of its purpose a cryptic note scrawled next to the music:

In order to play the theme 840 times in succession, it would be advisable to prepare oneself beforehand, and in the greatest silence, by serious immobilities

The piece was not published during Satie’s lifetime, and he is never known to have mentioned or performed it. Vexations was first performed some 38 years after Satie’s death, when John Cage interpreted the note on the piece as stating that it should be played 840 times in a row, and staged a marathon 18 hour performance. After the performance, Cage said:

the experience over the 18 hours and 40 minutes of those repetitions was very different from the thought of them or the realisation that they were going to happen. For them to actually happen, to actually live through it, was a different thing. […] I had changed and the world had changed.

What’s interesting about this is that Cage, who popularized the piece with his interpretation that it should be played 840 times, Note that the actual verbiage on the music makes no mention of how it “should” be played, merely how one should prepare should they wish to play it 840 times in a row. is saying that Satie, having never performed Vexations, fundamentally cannot have understood how his piece would be experienced.

While there’s a death of the author argument to be made here, and I don’t deny that Cage had the experience that he did this is interesting to me as a reflection of broader trends in the world of art that surrounds minimalism as a musical philosophy — a tendency to gesture towards grandiose ideas and fundamental truths, rather than admitting that suggestions of how to prepare oneself to play a piece 840 times might simply be a joke, a cute statement to write on one of the many small pieces that Satie produced throughout his life. I don’t think there’s anything wrong with searching for grandiosity — you can definitely find fundamental truths in anything if you look hard enough. And as far as things to search for meaning in, 840 repetitions of Vexations seems pretty good — personally, I’d love to attend a performance. But I also wish there was more space in minimalism for meaninglessness, for pieces that exist for their own sake and nothing more, to have music that’s simply trying to be, rather than trying to say something.